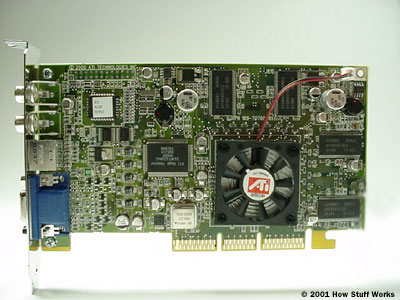 Like a motherboard, a graphics card is a printed circuit board that houses a processor and RAM. It also has an input/output system (BIOS) chip, which stores the card’s settings and performs diagnostics on the memory, input and output at startup. A graphics card’s processor, called a graphics processing unit (GPU), is similar to a computer’s CPU. A GPU, however, is designed specifically for performing the complex mathematical and geometric calculations that are necessary for graphics rendering. Some of the fastest GPUs have more transistors than the average CPU. A GPU produces a lot of heat, so it is usually located under a heat sink or a fan.

In addition to its processing power, a GPU uses special programming to help it analyze and use data. ATI and nVidia produce the vast majority of GPUs on the market, and both companies have developed their own enhancements for GPU performance. To improve image quality, the processors use:

­ As the GPU creates images, it needs somewhere to hold information and completed pictures. It uses the card’s RAM for this purpose, storing data about each pixel, its color and its location on the screen. Part of the RAM can also act as a frame buffer, meaning that it holds completed images until it is time to display them. Typically, video RAM operates at very high speeds and is dual ported, meaning that the system can read from it and write to it at the same time.

­ The RAM connects directly to the digital-to-analog converter, called the DAC. This converter, also called the RAMDAC, translates the image into an analog signal that the monitor can use. Some cards have multiple RAMDACs, which can improve performance and support more than one monitor. You can learn more about this process in How Analog and Digital Recording Works.

The RAMDAC sends the final picture to the monitor through a cable. We’ll look at this connection and other interfaces in the next section.