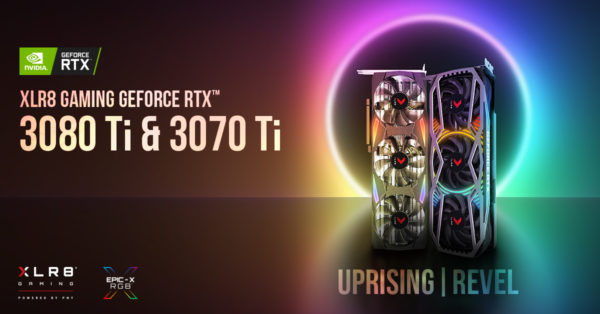 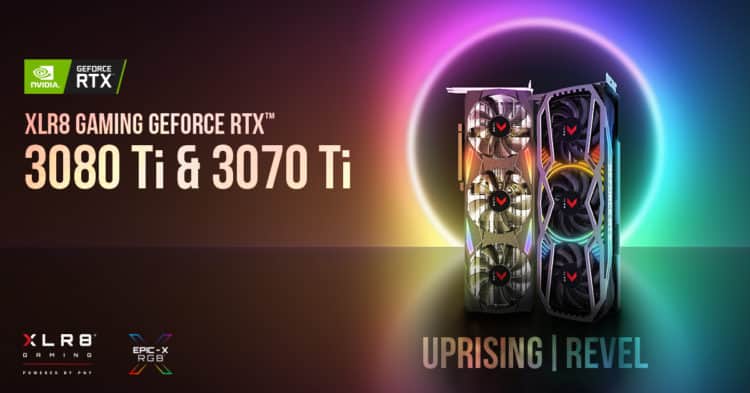 The PNY GeForce RTX 3080 Ti is powered by the Nvidia Ampere architecture and supposedly delivers a massive jump in performance with highly sought after features such as ray tracing, NVIDIA DLSS performance-boosting AI, NVIDIA Reflex latency-reduction, NVIDIA Broadcast streaming features, as well as some bonus memory that lets creators blast through the most popular creator applications as well. This card is built with enhanced RT Cores (for Ray Tracing) and Tensor Cores. According to NVIDIA: “Tensor Cores enable mixed-precision computing, dynamically adapting calculations to accelerate throughput while preserving accuracy.” It also includes new streaming multiprocessors as well as 12GB of superfast GDDR6X memory and 10240 CUDA Cores. Now, let’s talk about some more technical features of the 3080 Ti:

The GeForce RTX 3070 Ti is also powered by the Ampure architecture and is virtually the same as the 3080 Ti, delivering the same new features and upgrades, but just a bit less. The GeForce RTX 3070 Ti includes 6144 CUDA Cores and 8GB of GDDR6X memory, as compared to the 10240 CUDA Cores and 12GB of GDDR6X memory that the 3080 Ti. While this will see an impact on performance, if you’re looking for a cheaper – still not a cheap – option than the 3080 Ti, that’s what this card is meant for. Now, we move onto some more features, including:

Both the PNY XLR8 Gaming GeForce RTX 3080 Ti and RTX 3070 Ti will be available starting early June through BestBuy and Amazon as well as on PNY and other eTail partners. It is currently unknown how expensive these cards will be, but the NVIDIA GeForce RTX 3080 Ti will be priced at $1,199, so I would expect that the PNY 3080 Ti would be priced similarly at around $1,000. As for the RTX 3070 Ti, I would imagine that it would be anywhere from $800-900 given that it is less powerful than the 3080 Ti. Hopefully these graphics cards will stay on the virtual shelves for a bit longer than we’ve seen the regular 3080 and 3070 cards, since those tend to go extremely fast. Unfortunately, my hopes aren’t terribly high, as I’m sure that these cards will sell out just as fast, if not faster, considering they are significantly more powerful than the regular 3080 and 3070 cards. The good news is that NVIDIA has recently started reducing the Ethereum hash rate of their newly produced cards, in an effort to make these graphics cards less desirable to cryptocurrency miners; this will hopefully help players, the intended demographic  for these graphics cards, get their hands on the cards rather than miners who have been abusing them to mine crypto.

I’m incredibly eager to see how these cards perform, and I suppose we’ll be able to find out soon enough as you’ll be able to purchase them sometime in early June, though it’s unclear when exactly that may be. It could be today, it could be tomorrow, or it could be two weeks from now. Either way, I don’t care when they’re going to be available, I’m just looing forward to being able to play Destiny 2, Outriders, and all of my other favorite games at an even higher frame rate when these graphics cards are available!

How to Build a Gaming PC