There has never been a better time to pick up one of the best graphics cards for gaming. The last few years have seen a massive influx in processing power, and recent events have driven prices to an all-time low. What’s this mean for PC gamers? You can achieve exceptional performance from your gaming rig without breaking the bank.

Play in HD or UHD resolution and reach the highest FPS for incredible immersion and maximum competitive advantage. Pick up a card with high overclocking potential, and you’re set to game with the pros for years to come. There are countless benefits to snagging a graphics card for gaming, and we’ve narrowed down the top 10 best Nvidia and Radeon options to help you make the smartest decision possible. If you’re ready for breathtaking graphics and peak performance, let’s get started. 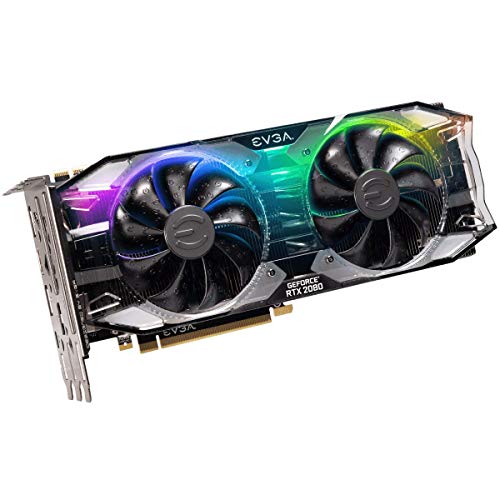 Our pick for overall best GPU for gaming

The EVGA RTX 2080 XC just hit the market, and boy does it deliver. It’s loaded with 8GB of the latest GDDR6 memory, and it boasts clock speeds up to 14,000! Moreover, it features NVIDIA’s new Turing Architecture to streamline your gaming experience and optimize your play for maximum FPS and overall performance. It handles 4K with ease, and it excels in the VR department as well. Overall, the EVGA 2080 XC is one of the best NVIDIA video cards on the market. Our pick for best 4GB graphics card for gaming

Asus is back with a new ROG Strix model, but this time it’s loaded with AMD Radeon processors. Naturally, can expect superb graphical performance thanks to 4 gigs of GDDR5 memory and Asus’ proprietary Auto-Extreme technology. This model also boasts high overclocking potential thanks to a plethora of cooling features including direct-GPU contact heatpipes, Fan Connect, and a patented wing-blade design. As for style? The ROG Strix features a sexy sleek shell accented by Aura Sync LEDs. Our pick for best 2GB graphics card for gaming

If you’re seeking an NVIDIA GPU that’s cost-effective and powerful enough for all your HD gaming needs, the Gigabyte GTX 1050 is the only choice. This 2GB graphics card packs quite a punch with 7,000 MHz clock speeds, and it’s even got Boost Clock tech for those straining in-game moments. Play at 1080p resolution to your heart’s content, and expect 60 FPS throughout the entire game. AMD just released a new lineup of GPUs, and the MSI RX Vega 64 makes full use of their unbelievable processing power. Play your favorite titles in either QHD or 4K for incredible immersion, and take advantage of 8GB of memory for maximum overclocking. Immerse yourself in your favorite titles, and play without ghosting, tearing, or choppy frames. This unit features all the necessary cables and connectors, and it’s been specially designed for quick and easy installation. Our pick for best video card for multiple monitors

The GTX 1050 TI is an exceptional NVIDIA GeForce Graphics Card that’s perfect for gamers and casual users alike. How so? For starters, it boasts a versatile design that integrates effortlessly with your favorite displays, as well as a budget-friendly price tag. In terms of performance, you can expect over 7,000 MHz clock speeds at full HD resolution for all your gaming and movie activities. Plus, it’s packed with state-of-the-art cooling components including a Twin Frozr VI Heatsink, Torx 2.0 Fan, and ZeroFrozr Tech. If you’re looking for a bit more bang for your buck, it’s worth looking into the successor to the GTX 1050 TI, the GTX 1650. The Nvidia GTX 1650 is not only a great GPU, but it’s also efficient in terms of power consumption. You can find out more details about the GTX 1650 in this NVIDIA GeForce GTX 1650 Review. Our pick for best graphics card under $200

If you’re looking for one of the best AMD video cards under $200, the Sapphire Pulse RX 580 is the perfect option. It features 8 full gigs of respectable DRAM and provides smooth and consistent frame rates at high resolution. Moreover, its versatile form factor works in a number of PC builds, and it’s also one of the best graphics cards for laptops. Plus, combined with its powerful pulse technology, the Sapphire 580 is a great model all-around.

This is the least expensive 4K graphics card on our list, but don’t let that fool you— It’s a beast of a card, and it performs on par with today’s top models. The Zotac 2060 Amp boasts 6GB of cutting-edge GDDR6 memory, and it tops the clock speed charts at an incredible 14,000 MHz. In addition, it’s loaded with NVIDIA’s full suite of built-in tech including Ansel, G-Sync, and the Turing Architecture system. With 3 display ports and 1 HDMI connection slot, you’re in for some kick-ass multi-screen gaming. If you’re on the market for the best graphics card under $100, this AMD GPU is just the ticket. Its low profile design boasts the Radeon R7 240 Chipset that’s packed with 2GB of GDDR3 video memory and a decent clock speed. As for connection slots? You’re looking at modern HDMI ports, as well as DVI and D-Sub for excellent adaptability. The MSI R7 240 is one of the best low profile graphics cards on the market, and it’s the perfect option for newbies and budget builds alike. If you usually choose the top tech on the market, the EVGA RTX 2080 TI is just the ticket. This NVIDIA GeForce graphics card is among the best consumer options on around, and it’s packed with everything you need to play any game on the market- in 4K, VR, or any other format. What makes it so special? Well, i’s loaded with 11GB of the newest DDR6 memory, ensuring the highest resolution graphics possible. It also reaches the peak of the major benchmark tests, and it’s adored by industry experts and consumers alike. Overall, it’s the best option on our list. The PowerColor Radeon 590, also known as the Red Devil, is an exceptional graphics cards that offers a great balance between features and cost. It’s got 8 gigs of memory built in, and it’s compatible with a number of modern technologies including DirectX, FreeSync, and Radeon VR. This unit also boasts ultra or silent overclocking, as well as LEDs and a smart fan for increased airflow. Combine that with the budget-friendly price, and you have a respectable card that rounds out our top 10 list.

What is a Graphics Card for Gaming? A graphics card, aka video card, for gaming is a printed circuit board that’s designed to generate high-quality images from game software. It achieves this through the built-in GPU, or graphics processing unit. The best gaming GPUs utilize the latest generation of NVIDIA or AMD processors to transfer image output from the game to a video display such as a computer monitor or TV set.

In addition to the GPU, each graphics card for gaming includes a:

These components work together to maximize your graphics output while communicating with your gaming motherboard and peripherals for optimal performance. To achieve this, most graphics cards are either integrated into the main CPU or sold separately as a dedicated unit. While integrated graphics cards have come a long way, most pro gamers and technophiles choose to insert a dedicated card for better performance and enhanced graphics. Combined with modern rendering technologies like OpenGL and DirectX, this results in HD 1080P or better resolutions at the highest possible frames per second. Naturally, a dedicated graphics card is a must for competitive players and those seeking full gaming immersion.

How do Graphics Cards Work?

You boot your computer and launch Apex Legends. As the visuals load, your graphics card springs to life to handle the bulk of the rendering for better system performance. You land on the main title screen and launch right into the game world.

As you enter the game, you see the giant map below you filled with beautiful 3D graphics rendered in stunning detail. Fortunately, your dedicated graphics card is built for gaming, and your 144hz monitor displays the scene with ease. You land safely on the ground, reach for a gun, and begin collecting gear. Then— an enemy approaches!

Things heat up as more strain is put on the graphics card. You manage to take the enemy down, but his squad mates approach. The fan on the graphics card whirs to life to handle the resource load. You keep your cool as your PC maintains 60 FPS per second. A shotgun pump and one more goes down. You crouch behind a nearby wall, then step out with guns ablazing. Pop, pop, pop, and the last opponent drops! Your squad marches on to victory, all thanks to the best graphics card for gaming.

The best graphics cards include a number of unique specs to benefit gamers:

Top graphics cards come loaded with their own unique specs that vary depending on type and manufacturer. For a rounded summary, take a look at our snapshots and be sure to inspect the product listings themselves. Choosing the Best Graphics Card for Your Rig

The downside to so many great options is that you have to choose just one! Let’s take a look at the top considerations:

If you’re a hardcore gamer playing the newest titles, a current generation NVIDIA graphics card is the way to go. However, if you take things more casually, an AMD or slightly older graphics card will probably do the trick. Regardless of your desired brand, be sure to check out the specs and customer reviews of your favorite models for compatibility and performance purposes. Also consider taking a look at expert benchmark tests to see how they perform in action.

It can be hard to stay within your budget when there are so many extra perks like LEDs, cooling systems, and software options out there. Our advice? Aim for that sweet spot between dream card and what your budget allows for, but do note that splurging a little now can save you from a costly replacement down the line.

How to Install a Graphics Card for Gaming

The graphics card installation process is relatively easy. Simply plug it into a dedicated PCIe lane on the motherboard, configure the BIOS, and you’re good to go. If you’re a seasoned technophile, this is probably second nature. However, even newbies can breeze through the process with the right tutorial.

To assist in the matter, we’ve pulled the following video by Linus Tech Tips over on YouTube. He takes you through the entire setup process from locating the correct installation slot to configuring your graphics BIOS. Check out the video below: